It’s as if Michael J. Fox has once again become an overnight sensation. His face  is on billboards everywhere for The Michael J. Fox Show, his much anticipated return to the screen since retiring with Parkinson’s way back in 2000. He was huge then and it seems now he’s back, he’s as popular as ever.

Sitting on the newsroom set of his sitcom at the Silver Cup Studios in Queens, he still resonates the charm of Marty McFly, just 30 years older. Maybe he hasn’t been dealt all the easiest cards to play, but his irrepressible confidence, congeniality, and honest charm makes you root for him just like the kid in the ice cream parlor in Back To The Future. His illness is very much secondary to his ebullience. This is achieved, you suspect, with some of the same single mindedness that lifted him to super stardom back in the seventies – a trait he so eloquently identifies in his first book, Lucky Man.

Denis Leary, a close friend, has said that he’s always had a dark side, even before his diagnosis with Parkinson’s. Fox attributes the dualism in his personality to fame- and not the other way round. “It’s very hard to figure out. It reaches every pore of your body, it reaches every aspect of your life and you don’t know what’s real, and you don’t know where you stand.”
At 52, he’s learned the importance of recognizing how much space something takes up in your life. How much time you dedicate to each thing, and the order in which you prioritize them, ultimately dictates your own perspective. You have to be fully aware of the different requirements of each part of your life, or else you’ll find yourself lost in a world of total consumption. Fox calls himself a Lucky Man because Parkinson’s taught him how to be a real person instead of just a film star. 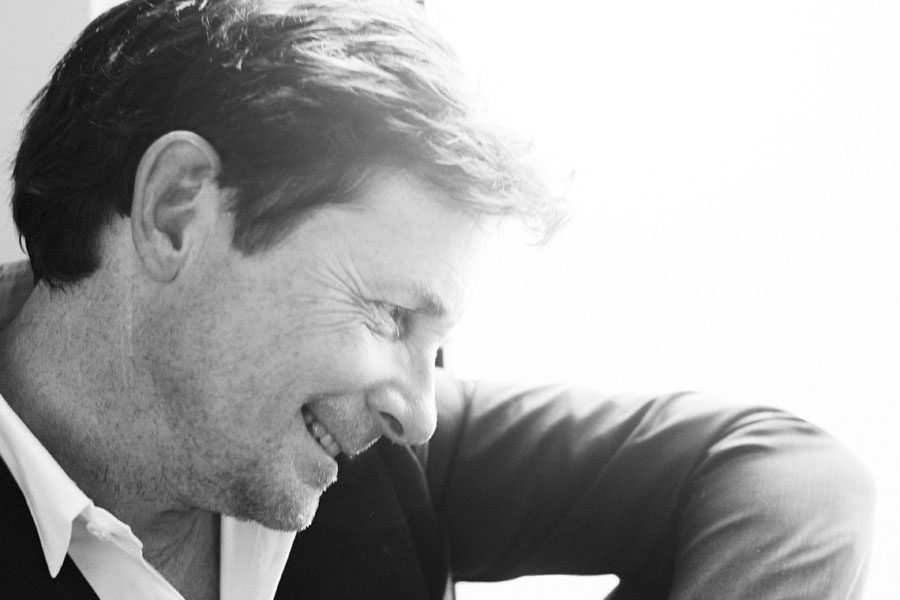 Starting the Michael J. Fox Foundation in 2000, the same year as his diagnosis, Fox wasted no time in exploring research that could develop a cure for Parkinson’s disease. “There’s so many things that are happening,” he says of international research, “that I can’t keep track of them all. That’s kind of why I started the foundation, so I could put better minds on the subject. Better minds than mine.” The Foundation funds Parkinson’s research around the world. There has recently been some progress in Brazil. Scientists created a chip that was implanted in the spinal cord of a chimpanzee with Parkinson’s that has significantly arrested symptoms.  Michael says, “In creating these building blocks, the Foundation takes partial credit for anyone that they’ve funded along the way. So anytime I hear about something and I look at the history of it, we usually had a hand in it somewhere.”

Simply having Parkinson’s isn’t as challenging as navigating how other people react to the affliction. That’s strange, but not surprising. Those of us who have never had to personally interact with an illness that affects mental or physical faculties of someone close to us are often at a loss as to how to deal with it. We may unconsciously stare or conspicuously ignore people around us who display those symptoms out of sheer ignorance.

But after years of developing a daily routine of medication and exercise, Fox has successfully learned to normalize his daily life. With courage and determination, he admits that his acceptance comes from being honest and being truthful. “If you’re honest and truthful about what you see and what you deal with, then you’re gonna have more integrity.”

As for how genetics and environment played out in his own life, Michael’s passion for acting didn’t hit him overnight. It took a while to develop. “I had a difficulty with absolutes,” he says. “It didn’t interest me. It just seemed to be this is this, and 2 plus 2 is always going to equal 4, and there was no upside in it to me; there was no fun in it for me. “
His role on Family Ties may have finally given him a decent meal, but it also introduced him to his fellow costar and wife of 25 years, Tracy Pollan. Although she is now the CEO in their marriage, running the show by taking care of him and the kids, the moment he fell in love with her wasn’t exactly romantic. She had walked past him on set after coming back from lunch at an Italian restaurant. He remembers, “I could smell garlic, so I said, “Whoa, scampi for lunch, babe?” And she just turned to me and said, “That is the meanest fucking thing a human has ever said to me, you’re a rude son of a bitch.” And I was just…like, wow. That was amazing.”

A father of four kids himself, Michael now regrets that because of his profession, his children will have a drastically different perspective of life than he had growing up. His biggest concern is that they will never have to face any financial hardships. “My parents spent their whole lives trying to make us believe we had more than we had. And I spent my life trying to make my kids think they have less.” 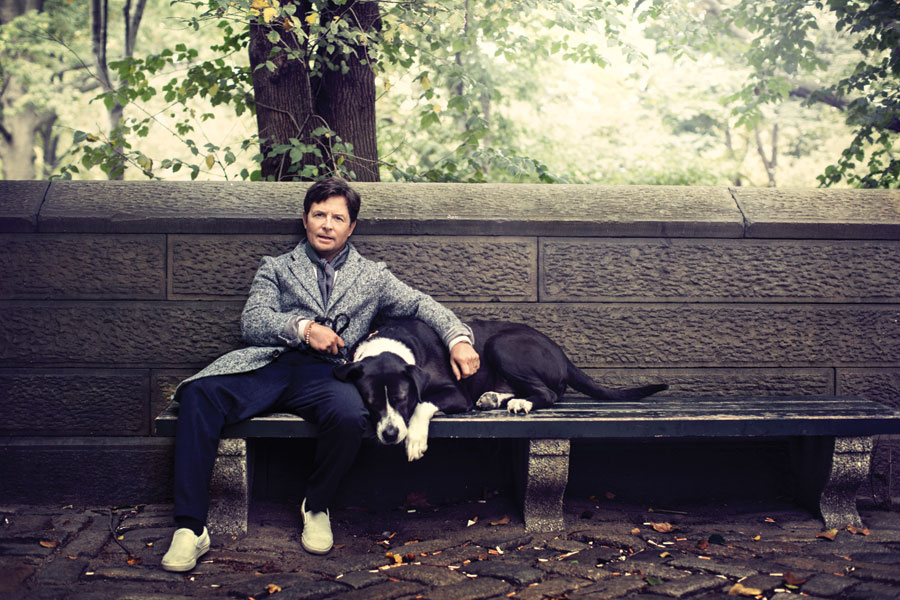 When he arrives in LA, Fox was barely able to pay rent, and not nearly able to buy sufficient groceries on his minimum wage salary. Close to starvation and working his ass off, he finally landed the starring role on Family Ties in 1985.

Looking back on his personal struggle, he sums it up with the idiom, ‘Hard work pays off’. Then he adds, “I wish you could put it into a pill and give it to your kids.”

But Fox isn’t worried that their financial security will prevent them from personal struggles. He says, “Everybody gets their own bag of hammers, their own trial, their own crucible. And they’ll have theirs.” His twin daughters are no strangers to struggle. About a month before they were due, the doctor needed to extract them from the womb due to twin-to-twin transfusion. One twin was dominating the blood supply and the food supply, and the other twin was suffering from it. There is a theory that states that the nine-month gestation period is the most formative in child development. Michael is fascinated by his personal observations that support this claim.  “They say that genetics loads the gun, but environment pulls the trigger,” he says.

Family Ties may have put him on the map, but it’s Fox’s performance as Marty McFly in the Back to the Future franchise that skyrocketed him to stardom. It’s arguably the most memorable character of his entire career. No one who’s seen it can forget the iconic incendiary guitar solo on stage during prom night in the first film. Besides the music, which he had previously recorded on playback, that jam session was all Fox. From an early age, he knew he wanted to do something creative in the arts. He dabbled in guitar and developed an insatiable love for music. Director Robert Zemeckis drew on this aspect of Marty McFly’s character to thoroughly prepare him for the scene. Sitting with his guitar teacher and the choreographer, Fox remembers going through all the guitarists that he loved—Pete Townsend, Jimmy Page, Keith Richards, Chuck Berry, Danny Van Halen. Incorporating all the signature moves of his favorite musicians, they put the finishing touches on the choreography and shot the scene from every possible angle. Reminiscing, Michael says with pride, “I loved it. It was a real fantasy for me.”

Though he enjoyed silver screen stardom, Fox admits that being a TV actor fits seamlessly into his life as it is now. “I can’t do theater because I never know how I’m going to feel at any given moment. Where as with [television], I can manipulate time. I can make one scene last and come back to it as many times I want, depending on how I’m feeling.”

Fox is pretty confident in his comeback but isn’t placing any unnecessary expectations on it. “However long this run lasts,” Michael says, “if it lasts 4 or 5, 6, 7 years, that puts me in my late 50s, and that’ll be a time when I’m ready to travel around the world and have a good time.”

Airplanes and passports may be in his future, but Capitol Hill certainly is not. Fox is by no means apathetic towards the political arena and the gains to be made on the lobby floor. In fact, five or six years ago, when there was a call for stem-cell research defense, he saw a clear role for activism. He had to spend a significant amount of time in front of Congress to lobby for research. But while Fox is content and open to ad hoc positions, he doesn’t see himself holding political office. But, he notes, “I’d like to be a part of its change, but I’d rather do that as a voter and a citizen.”

As we say our thank yous and goodbyes and see-you-at-the cover-partys on the set of The Michael J. Fox Show, it’s clear that Michael hasn’t lost the fluid movement of his signature acting style. Those subtle yet exaggerated movements that add animation to simple emotions ironically work with a condition (P D ) which can notably impact motor skills. He admits that although the subtleties aren’t as smooth as they once were, they still work, because they’re still natural physical expressions, “I did a scene this morning where I met this guy. He was a hockey fan and I was a hockey fan and we kind of had a man crush.” He then proceeds to demonstrate how at the end of the scene, he used his trademark hand-in-pockets boy-next-door shoulder shrug. It’s a holdover from his days as a teen star, but the move still works. And in a wonderful and strangely satisfying way, so does he.

Michelle Rodriguez (…and no messing) 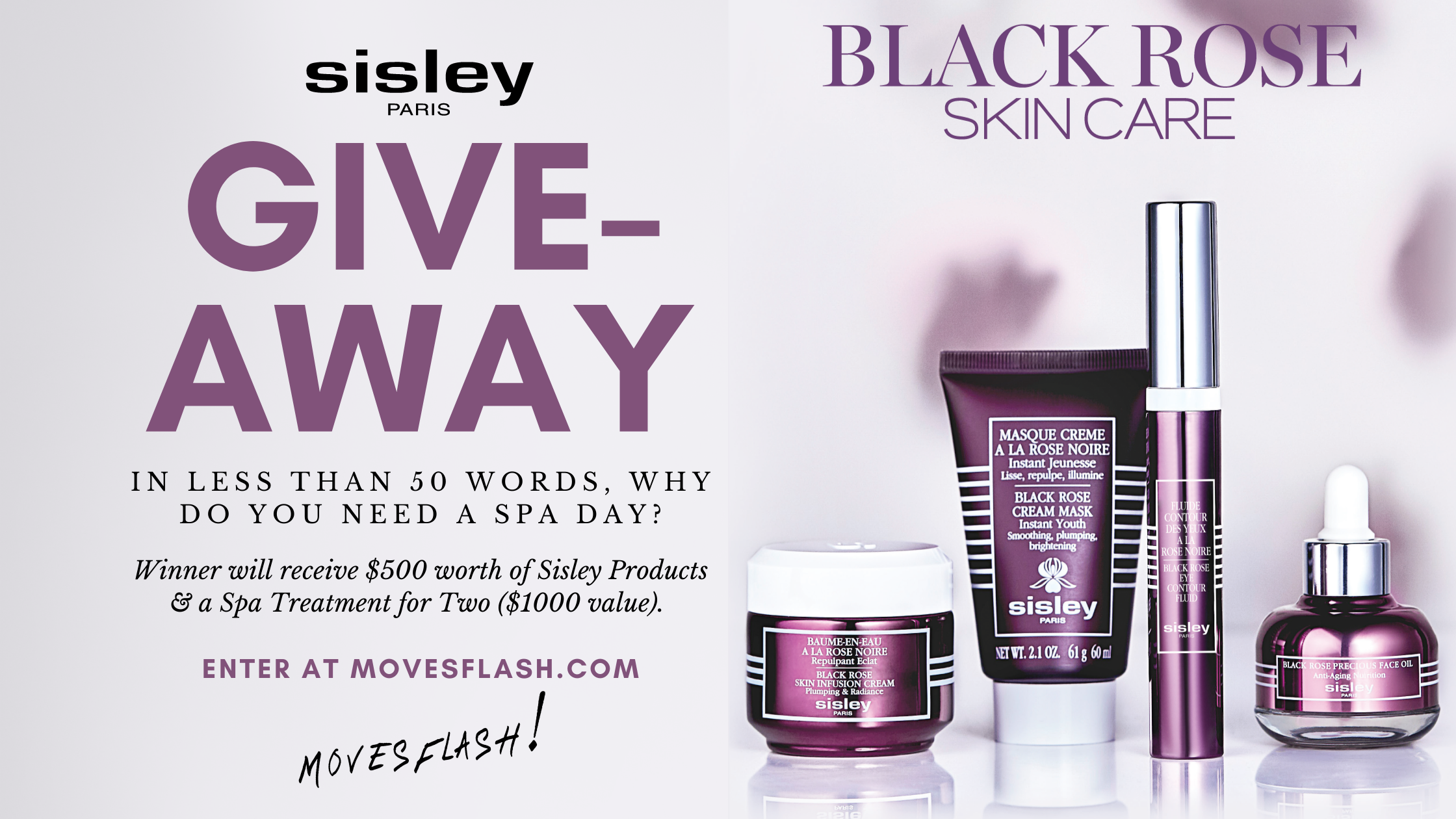 No any image found. Please check it again or try with another instagram account.
Happy Birthday @robingwright 🥰 ​Hope you had a wonderful one! https://t.co/hdnOlAVok1

Reply Retweet Favorite
Congrats to @NaomieHarris for joining @Showtime adaptation of 'The Man Who Fell to Earth' ! The sci-fi limited seri… https://t.co/7mu9VoaiuS